Note:  Below is an article recently published by the College of Optometrists in Vision Development (COVD) on amblyopia, otherwise known as “lazy eye.”  As the author mentions in the article, amblyopia isn’t always easy to detect.  This makes it critical for children to have a comprehensive vision exam by a developmental optometrist in early childhood. Through early identification and treatment, children can avoid the early learning difficulties that often accompany amblyopia, as well as the increased chance of vision loss. 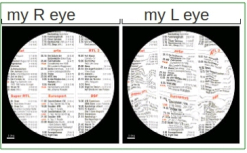 The visual implications of amblyopia: Photo from visionhelp blog

Amblyopia is a neuro-developmental disorder of the visual cortex that arises from abnormal visual experience early in life. It is commonly described as a type of “lazy eye,” when one eye isn’t able to see as well as the other despite using glasses or compensating lenses. Amblyopia can occur with or without a visible eye turn (strabismus). When amblyopia is found with an eye turn it is called strabismic amblyopia. When it is accompanied by a significant difference in compensating lens strength between the two eyes it is called refractive or anisometropic amblyopia. This usually happens when one eye is more farsighted (rarely more nearsighted) than the other. Amblyopia can also be due to deprivation of necessary visual stimulation during development. This is called deprivation amblyopia. The risk of developing amblyopia occurs when the causal factor is present during the sensitive period, which is from birth up to 8 years of age.  Different functional losses in amblyopia result from different early visual experiences.

You can read the rest of the post here: